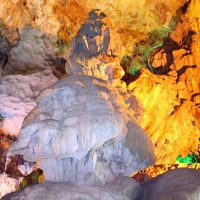 Vietnam is an astonishing mix of natural highlights and cultural diversity. The scenery ranges from jagged peaks seen from winding mountain passes down to verdant paddy fields painted every shade of green in the palette, while the nation’s long history and an amazing number of ethnic minorities mean that culture-vultures will find plenty to admire. Hikers, bikers, and outdoor lovers can get their teeth into the countryside within the numerous national parks, while the spectacular karst seascape of Halong Bay is one natural sight that even the more slothful can experience up close on a cruise. While the rural areas brim with fantastic panoramas, the big cities breathe with contemporary life and provide ample opportunities to get stuck into Vietnam’s tasty culinary highlights. This fascinating country is full of surprises and is one of Southeast Asia’s most underrated destinations.

1, Halong Bay
The karst seascape of Halong Bay is one of the world’s most spellbinding sea views and is a UNESCO World Heritage Site. Thousands of limestone islands sit within this bay in the Gulf of Tonkin, eroded into jagged pinnacles by wind and water action over millennia. With the bay’s scenery best seen by boat, this is prime cruising territory. Opt for at least an overnight tour to see Halong Bay’s iconic views as a day trip doesn’t do it justice. There are plenty of caves in the bay that can be entered including the Hang Sung Sot, with three mammoth caverns, and the Hang Dao Go, with superbly weird stalagmites and stalactites. For most people though, the highlight is simply cruising amid the karsts and soaking up the changing scenery of pinnacles as you pass by.

2, Ho Chi Minh City
For big city fans, no visit to Vietnam is really complete without a visit to Ho Chi Minh City, the buzzing and crazy commercial hub of the country. The streets are an insane clog of motorbikes and cars, the restaurant and cafe scene is incredibly cosmopolitan, and the shopping is the best you’ll find in the country. At its center is Dong Khoi, a relatively small and easily navigable central district, which holds most of the city’s sights. Here, you’ll find the HCMC Museum, with a brilliant collection of artifacts that weaves together the story of the city, and the grand Notre Dame Cathedral, built in the late 19th century. Check out the old district of Da Kao nearby for some of the best surviving examples of the city’s French colonial architecture and also to visit the Jade Emperor Pagoda with its dazzling array of Buddhist and Taoist religious iconography. Afterward, the History Museum is a must-do for history fans with stacks of relics on display from various archaeological sites.

For many visitors, the two big hitter attractions not to miss are just a little out of the center, along Nguyen Thi Minh Khai Street. The Reunification Palace, then known as Independence Palace, was the residence for South Vietnam’s president. It’s chiefly famous as the spot where North Vietnam’s tanks stopped on 30 April 1975, officially ending the war. It’s a completely fascinating place to visit complete with 1960s furnishings still in situ. Nearby is the War Remnants Museum, which although very obviously biased, paints a disturbing picture of the brutality of war and the many atrocities committed by US Forces during their Vietnam campaign.

3, Hue
One of Vietnam’s most historic towns, Hue is packed to the brim with relics from the reign of the 19th-century Nguyen emperors. Sitting along the banks of the gorgeous Perfume River, the Imperial Enclosure is a huge site set within walls that sprawl for 2.5 kilometers. While touring the grounds check out the gorgeous Ngo Mon Gate, the Thai Hoa Palace with its finely lacquered interior detailing, the Dien Tho Residence where the Queen Mothers would live, and the Halls of Mandarins with its preserved ceiling murals. A dazzling number of historic sites lie outside the Imperial Enclosure walls as well.

One of the nicest ways of visiting a collection of outlying sites is by taking a riverboat cruise on the Perfume River. A day cruise can take you to visit several royal tombs along with some pagodas. If you’re short on time, the best tomb to visit is the Tomb of Tu Doc and the most important pagoda in the area is the Thien Mu Pagoda, with its tower that soars for 21 meters high.
4, Phong Nha-Ke Bang National Park
One of the world’s best-caving destinations, World Heritage-listed Phong Nha-Ke Bang National Park is a dramatic karst mountain formation honeycombed with huge caverns, which are home to superb stalactite and stalagmite displays. The most popular destination within the park is the Paradise Cave, which extends for a staggering 31 kilometers below ground. The yawning caverns here are truly spectacular. Tu Lan Cave is a “wet cave,” and a visit here includes swimming through the cave-systems river. The other most popular excursion is to the Phong Nha Caves, where the interior is accessed by boat. You can access Phong Nha-Ke Bang National Park from Son Trach.
5, My Son
Surrounded by lush jungle-covered mountains, My Son is a ruined Cham era temple city that dates from the 4th century. This old Hindu religious center was still very much in use during the 7th to 10th centuries and only fell into complete decline and abandonment during the 13th century. There are around 20 temple structures still standing here, all built of brick or sandstone blocks and showing interesting influences from various Asian empires, including Indian and Malay. Note that the temples of Group B are the oldest, while Group A once contained the site’s most important monument but was destroyed deliberately by US forces during the Vietnam War. A good museum on-site houses plenty of information on the Cham. Access to My Son is from Hoi An.
6, Hoi An
Beautiful Hoi An is the most atmospheric city in Vietnam, with bags of surviving historic architecture. The old town quarter is a joy to explore, packed to the brim with well-preserved merchant houses that hark back to Hoi An’s trading center heyday of the 15th century when the town was a major meeting point for Japanese and Chinese merchants who flocked here for the local silks. Plenty of the old merchant houses have been opened to the public, so you can get a taste of these times. The best is 17th-century Tan Ky House, with fascinating architectural and decorative elements.

Hoi An’s major symbol is the delightful Japanese Bridge at the western end of Tran Phu Street, while nearby, the Assembly Hall of the Fujian Chinese Congregation is the old town’s most highly decorated temple. There are numerous small pagodas and museums dotted about town, but Hoi An’s true charm is found in simply rambling the old town streets admiring the well-preserved facades.

7, Sapa
The verdant rice field countryside surrounding Sapa, bordered by the jagged peaks of the Hoang Lien Mountains (often still known by their French colonial era name of the Tonkinese Alps), are home to Vietnam’s most beautiful rural vistas. The deep valleys here are home to a diverse mix of the country’s ethnic minorities including the Hmong, Giay, and Red Dzao people while the rippling hills are terraced with rice fields and overlooked by the country’s tallest peak, Fansipan Mountain. This is the top trekking destination in Vietnam, with oodles of options to trek or day hike between tiny villages and experience the staggering mountain views. Sapa itself is the main base here – an old French hill station and now a bustling and forever growing tourist center that is a stark contrast to the sumptuous tranquil countryside right on its doorstep.

>> Sapa Tours: http://vietflametours.com/tours/hanoi-sapa-tour-3-days-2-nights
8, Hanoi
Vietnam’s capital is the frenetic heartbeat of the nation and a place that befuddles travelers as much as it charms them. The motorbike frenzy, pollution, and constant clamor of street vendors can get too much for some travelers, but if you want to dive into Vietnamese city life, Hanoi is the place to do it. The old town quarter has plenty of dilapidated charm on offer, while history fans should make a beeline here simply to see the bundle of excellent museums. The Vietnam Museum of Ethnology and Vietnam Fine Art Museum are both brilliant introductions to the diverse artistry of the country, while the Ho Chi Minh Mausoleum is an important tribute to the founder of modern Vietnam.

9, Nha Trang
For sandy fun in Vietnam, Nha Trang is king. The well-maintained beach trundles for six kilometers along the shoreline of central Nha Trang city and during summer is jam-packed with local families on vacation as well as foreign visitors. There is excellent swimming here with designated swimming areas and manicured lounging areas that make this a great option for relaxing days soaking up the sun and sand. If you do get bored of sunbathing, the ancient Po Nagar Cham Towers are just to the north across the Xom Bong Bridge and have been used as a place of worship here since at least the 7th century (with some historians saying the site itself has been a place of active worship since much earlier). There is also an excellent museum dedicated to the work of Alexandre Yersin who discovered the cause of the bubonic plague and founded Nha Trang’s Pasteur Institute (which still carries out vaccination programs in Vietnam today).

10, Củ Chi Tunnels
An absolutely fascinating experience for all travelers, not just those interested in Vietnam’s modern military history, the Củ Chi Tunnels are an extensive tunnel network that during the war, stretched for more than 250 kilometers, allowing VC troops to operate and communicate in the area surrounding Ho Chi Minh City. Two short sections of the network can be visited with a guide who’ll take you down into the narrow unlit confines, which definitely are not for claustrophobia sufferers. You will literally be crawling on your hands and knees and some points. You can access the tunnels at either Ben Dinh village (the more popular choice) or Ben Duoc village.

>> View Cu Chi Tours: http://vietflametours.com/tours/cu-chi-tunnels-ho-chi-minh-tour-full-day
11, Ba Be National Park
Tranquil Ba Be National Park is absolutely stunning with the three interlinked Ba Be Lakes at its heart, rimmed by jagged karst peaks and thickly forested slopes. Most visitors come here to take peaceful boat trips or kayak on the lake and explore the caves full of stalactites and stalagmites in the vicinity, but for the more active, there’s also excellent hiking and trekking in the hills here between ethnic minority villages. This is one of the most peaceful spots in Vietnam, and travelers who spend the night here sleep in traditional stilt-house homestay accommodation along the lakeshore, allowing an experience of simple rural life.

12, Mekong Delta
The far south of Vietnam is where the mighty Mekong River finally finds its way to the sea in a maze of waterways that crisscross the floodplain. Incredibly lush, with paddy field vistas and mangroves, and full of local life, with chaotic floating markets to explore by boat, the delta is one of the most interesting regions for travelers to discover. Can Tho is the most popular town to use as a base as it’s close to the floating markets of Phong Dien and Cai Rang, while boat trips from Ca Mau allow you to explore the U Minh Mangrove Forest and Cau Mau Nature Reserve.